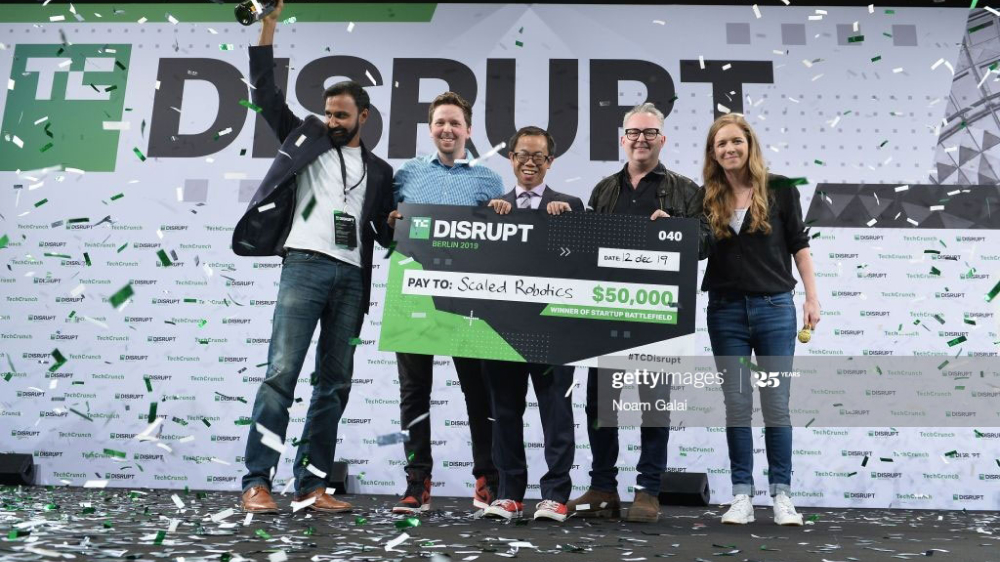 What was a chance introduction from a pick-up soccer teammate lead to a casual chat between two strangers in 2014. This quickly evolved into a friendship and eventually turned into an entrepreneurial adventure. Sharing a common vision to reduce the waste and inefficiency in the construction industry, the co-founders of Scaled Robotics: Stuart Maggs and Bharath Sankaran, embarked on a journey to modernize construction.

As an architect with a broad background in Computational design and fabrication, Stuart felt particularly frustrated by the fact that there were no tools available to build what was designed in the office. Stuart recalls a scenario during a visit to a construction site where the general contractor wanted to check if all the ducts in the ceiling were installed above 2 meters as specified by the plans. Without scans, they had to try to get the answer by using a 2-meter-tall stick, walking around and stopping when it hit something lower than the 2-meter mark. Situations like these are considered normal in construction and demonstrate that the existing tools are out of date.

On the other hand, Bharath, a Roboticist and Computer Scientist, saw construction as a field where robotics and AI could be applied and have a real-world impact on everyday problems that affected peoples’ lives rather than working on abstract ideas, which he had been pursuing much through his scientific career. To continue the example above, let’s say that, instead of using a 2-meter-tall stick, the general contractor uses a laser measure to check that the ceilings are installed above 2 meters. Although a better tool, a question mark hangs over its effectiveness and scalability when we are talking about hundreds of square meters and thousands of elements on-site to be looked at.

At Scaled Robotics we are set to work on those underlying challenges, but the environmental costs of construction also played a role in the company’s philosophy. Construction is responsible for 50% of all non-renewable resources we consume, yet its ecological impacts often go overlooked. Because shelter is a basic human need, it becomes urgent to move construction away from wasteful processes to a more sustainable-driven approach.

With these goals in mind, Scaled Robotics’ founders managed to raise a €1 million pre-seed investment in 2016 with the support of partners like PERI, Autodesk, AF Gruppen, DuraVermeer, and Kier, running pilot projects in Europe, the Middle East, and Asia. For a couple of years now we have been able to deploy our technology in an industry that, despite being largely conservative, has been enthusiastic about what we are doing.

From a construction worker to a project manager, people have learnt to recognize the value and impact of automating progress monitoring in the construction site. Even outside of the construction industry, other stakeholders support the idea of bridging the gap between the digital and physical worlds in the construction industry to create a manufacturing process that is more efficient, lean, and cost-effective. Among those, there are several teams of VCs, tech leaders and start-up experts, who served as judges at the TechChrunch Disrupt Berlin 2019, one of the most important tech events in Europe and where we took first place after having competed against 14 other outstanding start-ups.

Digitization is spreading through the industry and we have faced great interest in our proposal to fill in the gaps. We have secured earlier this year a €2m seed investment and we are very pleased to have now Surplus Invest and Construct Venture on the team, both investors who share our vision of changing the industry through a combination of robotics and artificial intelligence. This has allowed our team to double size in just a few months, and at the same time increase delivery of value.

Last May, we launched the beta version of our software to the general construction industry and we plan to continue delivering our message and offering companies the possibility to manage risk and uncertainty in ways that were previously impossible improving processes, productivity, and quality. In the COVID-19 world, automation can stand in where humans can not, ensuring that operations keep running and that companies stay competitive and on budget while keeping their workers safe.

Would you like to know more about what we do? Read our previous article: Digitizing Construction or visit our website www.scaledrobotics.com

See how we can help you keep your construction project on-budget, improve quality control and enhance coordination between your onsite team

You can find out more about which cookies we are using or switch them off in settings.

This website uses cookies so that we can provide you with the best user experience possible. Cookie information is stored in your browser and performs functions such as recognising you when you return to our website and helping our team to understand which sections of the website you find most interesting and useful. For more information, visit our Privacy Policy.

Strictly Necessary Cookie should be enabled at all times so that we can save your preferences for cookie settings.

If you disable this cookie, we will not be able to save your preferences. This means that every time you visit this website you will need to enable or disable cookies again.